Pictures in your mind. This by Dreja Novak

I can’t paint, but I invented a painting in my mind, because I wanted to see if I could put a narrative into a static image. My picture idea features a city park in glorious summer sunshine. There’s a playground. Children clamber and run. An open space. Jumpers for goalposts. Kids throw bread for ducks on a pond. Café. Cyclist. Ice cream. Frisbee. Picnic. There are tennis courts. Empty but for one young woman. She’s dressed for tennis, but she is a lone figure. She leans on the fence as if trapped by it; racket down to her side. She looks out wistfully through the fence across… at the children in the playground and their parents chatting.

Now you have found her in the painting what can you tell me about her life? Can you invent her backstory? I feel sure you can. Sit back and have a little think about her before you read on. Focus on her. Zoom in to her life. What does she look like? What is she thinking? What do you think her life is like?

The setup in the painting is enough to inspire her story; I’m guessing you have the same starting point as me. She desperately wants children. There’s only so much tennis you can play in an unfulfilled life, and despite her career, money, spare time, parties… she wants a child. Now go deeper. Think about where she lives. The people in her life. What she does. What she wants. What are the conflicts in her life? Now make the whole image move in your mind. Make time pass and change happen, like watching a movie. Do you feel the sunshine? Does the scene change?

Can you dig deeper and turn it into something different? Maybe it’s not our first thought. Maybe she’s more than happy not to be tied down to the hard work of parenting. She’s hugging herself that she has all this time for sunshine and tennis. Her friends are coming. It will be a day of tennis, friends, gin and tonic, and a night out tonight. She’ll be very happy if she never has to give birth. Now let’s go home with her. Where does she live? Can you picture the walk home from the park? What does she do? Who is in her life? What are the conflicts now she is at home?

I find this wonderful. We are now immersed in a world. A story world. We have gone there. And we can press ‘play’ and see what unfolds. This is the game. Writer training. Next time you are driving or sitting in a coffee shop or waiting for a train, look at the people going by. Notice them. Really notice them. The lady at the bus stop. The man at the chemist. Look into their eyes. Know them. What are they thinking? The couple walking together – what is going on with them? Imagine your character in a private moment. Imagine what they are like at a party. What happened last week that is causing them to think? What are they doing that is morally problematic? What do they want from life? Do three things: 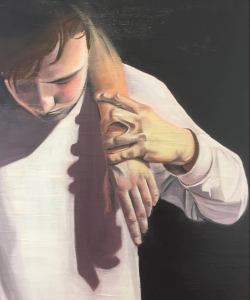 Now we have character. Now we have narrative. But… how do we turn that into compelling story? OK. You know what fulfilment means to the character, so now have them take action towards it. Now bring in another character and give them their own definition of fulfilment and motivation that obstructs your character from achieving fulfilment. Let’s say your character wants to marry the man the other side of the tennis net. Now introduce a character with opposing motivation. Say, for example, he’s married already. But it’s not going to stop our girl. They flirt and she is pretty sure she can get him. Now she takes action. “Would you come back to mine and help me move a dresser? I’d be so grateful..” And now we have story.

I do this as a game with the kids in the car. We look at passers-by and invent their story. Then go deeper, asking then what? And what made that happen? What motivates them? What do they want from life? Deeper and deeper. Who caused that? What then? What then? It is great fun, interesting for story development, and brilliant exercise for the imagination (although sometimes a little scary in terms of what you find out is going on in the minds of your own children!)