I have written nine books, four screenplays and have been commissioned as a story consultant on dozens of film and television productions including the multi-award winning feature Homeless Ashes (2019), the Oscar-qualified 2020 film White Gold and the upcoming feature film Sitting Under the Chestnut Tree (2021) starring RJ Mitty (Breaking Bad).

I have a Ph.D. for my original research in narrative theory and I speak internationally on how stories get their power to grip and intrigue a human mind.

“David Baboulene is a genius at getting your script as
powerful as it can be.”
Marc Zammit (Producer) 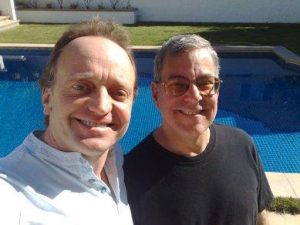 David discussing story theory with Bob Gale – writer/producer of Back to the Future.

But I started out like you. A passionately driven writer, loving stories and writing whenever I got the chance, but unable to turn that passion into a living. I was 40-years-old when I finally got my first publishing deal.

NOW I know how it’s done. I work with agents, publishers, producers, actors… I know what it takes to approach the industry as an aspiring writer, and I know for sure that the vast majority of writers either barely market themselves at all or, if they do, they get it all wrong and suffer the pain of regular rejection.

“Receiving a publishing deal was a dream turned reality. In my acknowledgement page is written: David Baboulene: I did it, and you are a heck of a teacher!” Kerri Cuevas; author Deadly Kisses (2013).

I have discussed story with some of the biggest names in contemporary story-telling, including:

and many others. (These conversations feature in The Story Book; 2010)

“David Baboulene is truly a master when it comes to the science behind storytelling.”
Craig Hinde (Director).

In addition to dozens of story consultancy credits, David has written four books on the subject of story theory: The Story Book (2010); Story Theory (2014); A Constructivist Narratology (2019); and the upcoming masterwork The Primary Colours of Story (2019) — a ground-breaking new approach to understanding story. This project is the product of his life’s work in story.

David’s doctoral research proved that the power of every story lies in how a story resonates with a human mind. Writers must work with knowledge gaps and subtext to trigger a psychological response. The Primary Colours of Story encapsulates his ground-breaking approach to narrative which is revolutionising the way stories are understood, evaluated and developed.

“We cannot recommend David Baboulene highly enough. His insights and expertise on story creation have been invaluable, helping us get the script of HALLO JOE to the point where we’ve sold the option and look forward to full production”
(MARK HALLILEY and PERRY SCHAFFER, Scriptwriters)