Well, I would say that, because I’m writing this web page in the third-person. Seriously, I have provided script doctor services on dozens of financed feature films, shorts, television productions, the odd play and even one musical. 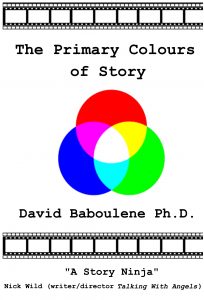 David Baboulene is a script doctor.

My unique approach as a script doctor involves using, for example, knowledge gaps, subtext and storification, so all comments are justified and explained through objective criteria. A comprehensive report is produced that is not simply my emotional sense or opinion. My script doctor services are based on my decades of experience and formal research and are as close to a ‘science of story’ as anyone has ever managed.

I can work cynically as part of a production team to explain and then maximise the story’s power, focus it’s genre, or build out the commercially advantageous elements. Alternatively, I can work in a more sensitive, diplomatic way, supporting a writer in nurturing their baby. Stories are usually intensely personal, and sometimes the problem is not that the story needs ‘fixing’, it is more a matter of helping a writer who is struggling to get the story to match their intent; they cannot see the wood for the trees, and my role as a script doctor is to understand and then capture the integrity of the original inspiration.  This is often the most valuable role a script doctor can play, and is why I believe every story should have a script doctor.

Let’s be honest – most people, even professionals in the story industries, do not truly understand story or know what it is that is working for them in a story to which they are attracted. A script consultant can identify that golden nugget that makes it special and gives it a heart. Even once that heartbeat is understood, it needs a champion to ensure it is retained. That is large part of the job of a script doctor.

If you are interested in talking to me about working with you on a project, do please get in touch via the Contact page.

“David Baboulene is truly a master when it comes to the science behind storytelling.”
Craig Hinde (Producer/Director).